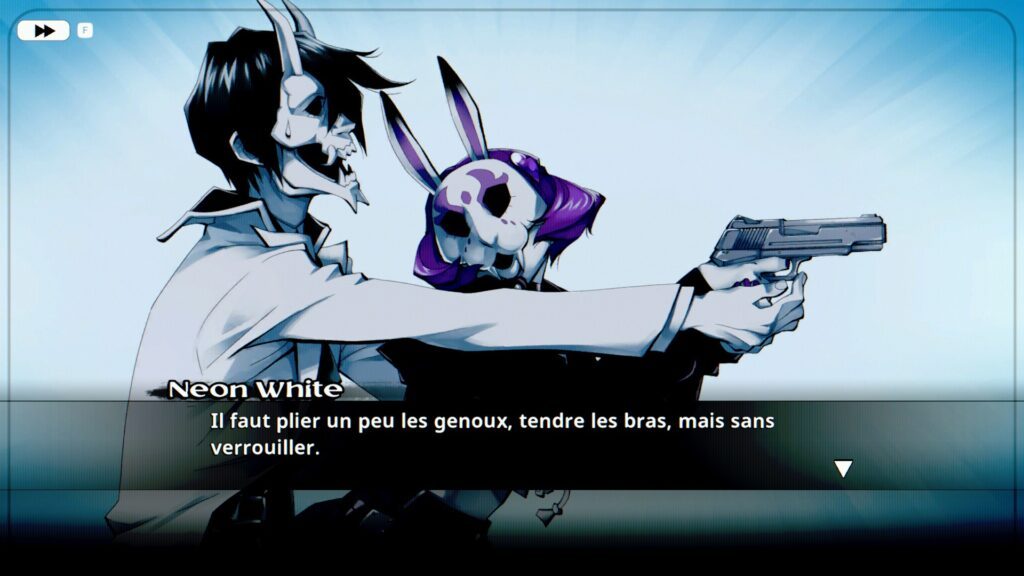 Blown away in a Nintendo Direct in 2021, Neon White surprises with its original proposal, that of a shooting game where firearms are playing cards, and where the music is always poum-tchak- brzzzt. With a studio like Annapurna editing, we expected a hell of a weirdness and no one is surprised: it’s a hell of a weirdness, but also one of the FPS of 2022.

In Neon White, the plan fell through. A job went wrong and this time it was you who took the extra bullet. It was you who were murdered. You wake up in the afterlife with a hell of a headache and nasty amnesia, before someone comes to you to tell you the news: you are now a Neon, and to earn your place in paradise, you will have to burn. The big gentleman in the sky is lazy, it’s up to you to do the dirty work: purge the different neighborhoods that surround the paradise of the demons who squat them. White, our main character who is currently having a bad Tuesday, learns that he must chain twelve destinations as quickly as possible before the day of the great judgment – ​​where we will decide if he wins his ticket to paradise.

To do things fast, you needed a game that goes fast, and that’s precisely the great achievement of Neon White. Angel Matrix and Ben Esposito’s game is an FPS where the missions last less than a minute and consist of crossing the finish line having eliminated all the demons on the way. We stick a few obstacles, aerobatic sequences, a few enemies and above all a stopwatch in the middle of the screen, and here we are with a game of speed run where more than weapons, it is movement and speed that matter. The weapons don’t even really look like what you’d usually find in a shooter, by the way. These are cards, which you pick up in the levels (on the ground or after killing an enemy) and which you keep in your hand while walking through the scenery. Each card has a limited number of uses and when you click to ‘play a card’ it fires a shot. Quite simply.

The desu of the cards

Neon White is available since June 16 on PC and Nintendo Switch.

So obviously, when you discover a shooting game that is also a card game, there is something to raise your eyebrows. But in fact, it’s a rather clever idea and you realize it very quickly after launching the game. Each weapon is associated with a color card (the yellow pistol, the green submachine gun, the blue rifle or the shotgun red) which allows you to know immediately what type of gun you have just picked up and what will be the effect of a left click. After a few levels, Neon White introduces a second mechanism linked to cards: the possibility of discarding them using the right click, and thereby activating a secondary ability. They can range from jumping for the pistol to leaping forward for the rifle, to a sticky bomb that allows you to eliminate a group of enemies or to project yourself into the air. These abilities are of paramount importance in the movements of the character but they require a bit of reflection, since activating them will remove the card concerned from our hand, and, by extension, the weapon that goes with it.

Added to this are some nuances such as the need to keep track of its cards and ammunition (rather rare, it helps) or destructible elements in the levels. In each of its twelve missions, all made up of about ten small levels, Neon White we stroll through minimalist environments with refined colorimetry, where everything is designed to never stop moving forward. At the start of the chrono, you have to get started, and think quickly to analyze the topology of a level and know where to go. Fortunately, Neon White is a game that responds to the finger and the eye and where it is easy to understand how to navigate. Each district of paradise will be an opportunity to discover a new game mechanic, from the double jump to the dash up to a vertical trampling. And a new ability learned, it usually brings a lot of new ways to play with the architecture of a level or eliminate its enemies. We experiment, we die, we experiment again, we die again and again, but that’s okay, because we start each new attempt with new knowledge.

From one test to another, a level does not move in Neon White. The scenery is the same, the enemies are stationary and the cards are placed in the same places all the time. Attempt after attempt, the muscular memory is set up and makes it possible to apprehend the situations with more ease. It’s very practical, because it lets the player learn by heart the places he visits to improve, letting him take his time if he wants. Each level is associated with a gauge of vision, which corresponds to the knowledge accumulated thanks to each run. The more we play a level, the more the gauge will go up and at certain levels, we have access to a ghost of our best time, a scoreboard and even advice – symbolized in game by small orange marks to follow to find a shortcut. Concretely, it is an aid that does not take by the hand. It can even be deactivated, for smart people who have never needed small wheels to ride a bike.

Demanding without ever being frustrating

By these simple but effective little ideas, the player is accompanied throughout his discovery of a title which, however, does not hold back from raising his voice when he feels like it. The first missions are quite classic in their construction but soon enough, we find ourselves facing new enemies (hostile or not), buildings to cross, jumps of several tens of meters and 180° rotations when we are launched at full speed. Right when you start to master a new ability and chain kid jumps in a level, Neon White takes pleasure in patting us on the shoulder before saying ‘look, I added a rocket launcher and a grappling hook’. Thanks to a level design intelligent and a well-balanced difficulty curve, the game knows how to be demanding without ever being frustrating. We never get tired of it, and it never drowns us in the game mechanics, to precisely focus on the essential: the rhythm.

And it must be recognized that Neon White is very, very strong for that. Caught in the fever of speed run, we live as a personal attack the discovery of the scoreboard, when we understand that we have done three seconds less than a friend in our Steam list. It’s little, three seconds. A normal person would stop there, and say to himself that we have to pack up, that there’s no point in trying hard to be better than a guy who’s never going to restart the game and see that we’ve beaten his time. But it’s addictive, your thing, and there’s not even a load time between levels. So why not restart the level one last time? It’s sure: we can find a shortcut if we try to jump over this wall, or we can gain a second by going through this hole. Quicker than you think, you start repeating the same level in a loop, biting your lip, optimizing turns and jumps under a deluge of station wagons of drums and biting synths (the soundtrack is incredible) to try to grab a few tenths of a second here and there. We chain the attempts mechanically, like a dehumanized puppet in search of redemption, and whose only priority before going to bed would be to obtain the Ace medal on all levels.

A game that talks too much

In total, it’s more than a hundred levels that you have to learn to master to overcome the game, after ten to fifteen hours. The lifespan depends on your appetite for dialogue and long sequences of visual novel. Because, yes, Neon White is a game that talks a lot. Succeeding in a mission brings the hero a little closer to the gates of paradise, and will be an opportunity to zone out a little in the middle of the characters who inhabit the afterlife. There are some that are endearing, like this cat disguised as a CEO who smokes his cigar on a small cloud, these ghosts who run a cinema or the angels who work in the administration of paradise. We sincerely enjoy visiting each neighborhood to see what it hides and discover new faces, because there are times when it’s really funny.

And there are the other Neons, colorful characters who, like us, are trying to reach paradise. Red, Green, Violet, and Yellow are all a little weird in their own way. Deep down, they’re not bad guys. It’s just that they love to talk, and often to say nothing. The conversations are however very neat: it’s super well animated, the dialogues are dubbed, the staging is clean and the icing on the cake, you can even find gifts in the levels that will change our relationships with the characters and give Access to side quests. Alas, we have to stuff ourselves with long minutes of meaningless dialogues and in all honesty, there comes a time when the narrative arcs turn a little in circles and the reversals of situation are no longer really surprising.

When you start to get tired of reading characters making butt jokes, don’t hesitate to abuse the Fast Forward button. Some, like Doom, had the presence of mind not to impose an empty scenario on us between each mission. Others like Neon White perhaps would have done better to follow the example a little. Never mind, you’ll still have a great time.

Neon White is clearly not a game to put in all hands. Go your way if you don’t like fast-paced FPS games, if visual novels repel you or if speedrun doesn’t interest you. If that’s even a little your passion, on the other hand, you will find an addictive game, addictive and which manages its rhythm like a boss. The kind of game that has you shutting down the computer at two in the morning with the throbbing panicking, the black pupil and sweat under your fingers. He is a little less good at telling a story but we forgive him, as he excels in the art of transforming his players into crazy acrobats.