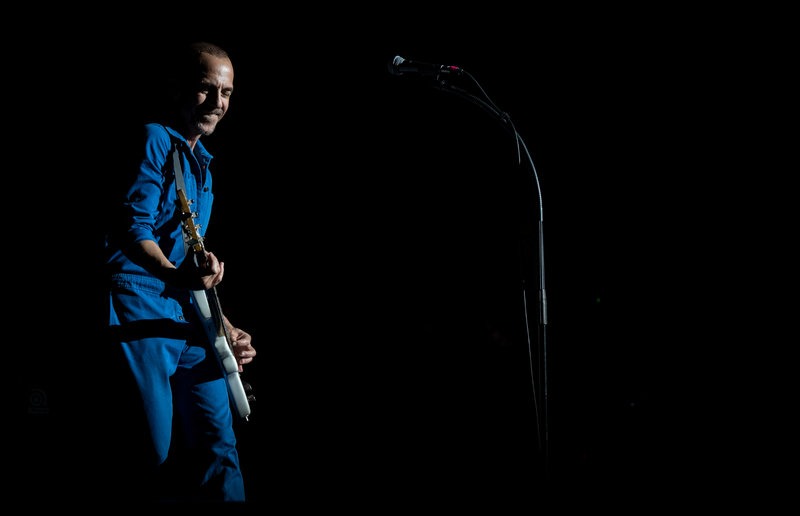 On June 28, 2022, Calogero, on the strength of the success of his latest opus “Centre Ville”, performed at the Fourvière amphitheater for a concert as expected as it was flamboyant.

It was only the second date of Calogero’s 2022 tour, after the Zénith de Nancy a few days earlier, that the Nuits de Fourvière hosted last Tuesday.

At 10 p.m., with a truly ideal outside temperature*, Calogero has forcefully taken over the Roman Theater to perform his greatest hits and a good part of the titles from “Centre Ville”.

After more than three years of scenic absence, the singer will have displayed all his scenic mastery, linking melodies vibrant with meaning and electric sounds to take fans on a journey through his repertoire.

For this new tour, Calogero has surrounded himself with a group of particularly talented and complementary musicians.

Cyrille Nobilet on the keyboard and Jan-Pham Huu Tri, the bassist, who have accompanied him for a few years now, not forgetting the guitarist Elsa Fourlon, with whom Calogero set up the Circus project in 2012, were there quite logically as they are now part of devotees of the artist.

As for Élise Masliah** (guitarist), Victor Raimondeau (saxophonist) and Christophe Deschamps (very great French drummer, loyal to Goldman in particular), the most recent of the Grenoble artist’s traveling companions, they also fit in perfectly in the collective.

The concert started with “I play music” and the tone of the show was immediately set. : rock, festive and feverish!

If the “City Center” disc really did the job, we can say that the album was really made for the stage, because the songs took on a much bigger dimension live.

As usual, Calogero does not do things by halves and he was accompanied by musicians with undeniable energy and obvious complicity.

On stage, one can only admire his unparalleled talent as a melodist and this ability to gather around hima bit like Julien Clerc did in his heyday, the best lyricists to write texts for the general public certainly; but never cutesy or touts. 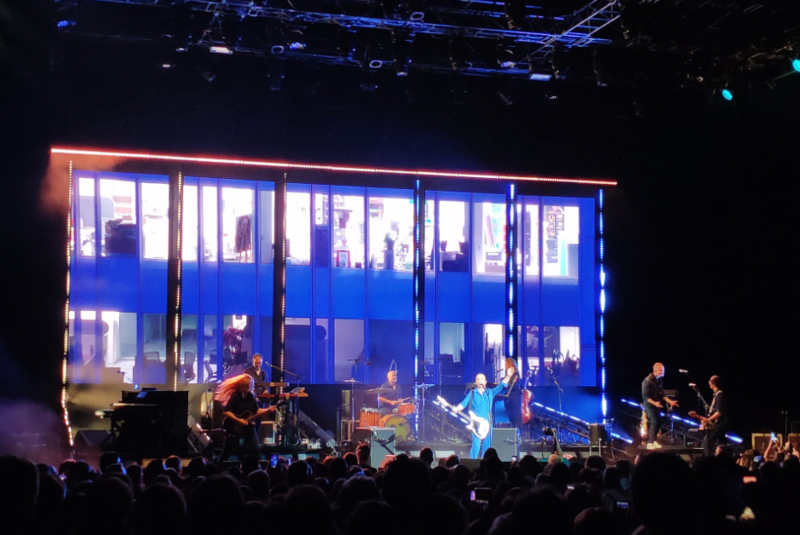 Calo knows how to make his English pop resonate, solar enough rock in the spirit, letting hear a beautiful balance between the voice which flies away, always with this immense mastery in the treble, and particularly electrifying guitars.

“Rumor” “The one from below” or “It was better after”, “We act as if” (the song dedicated to everyday heroes), : all the titles of his latest album were taken up by an audience who seemed to know the lyrics by hearthighlighting the festive side of festivals and this tendency to sing with one voice between the artist and his delighted audience! 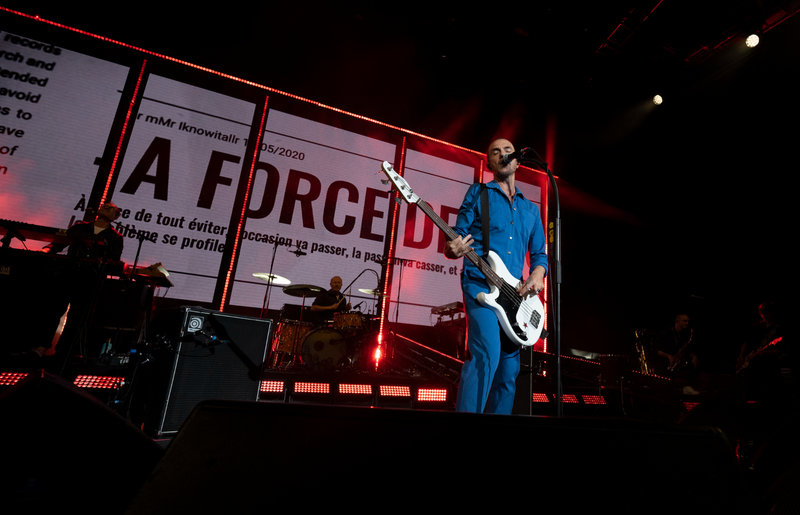 With top-notch scenography (with particularly well-used play of lights and a giant video screen), the show was also composed of his old hits which are now essential French songs, tracks that still sound great today..

“One day in the wrong place”, “Facing the sea” and “Yalla” have been taken up by all the ancient theater as so many timeless hymns.

We will also highlight the singular versions of the catchy “1987”, or the poignant “Before you”, very beautiful couple’s song, which respectively gain real power and real emotion!

Outside his personal repertoire, Calogero has nicely taken over “Shake the disease” by Depeche Mode, thus paying a very nice tribute to Andy Fletcher. 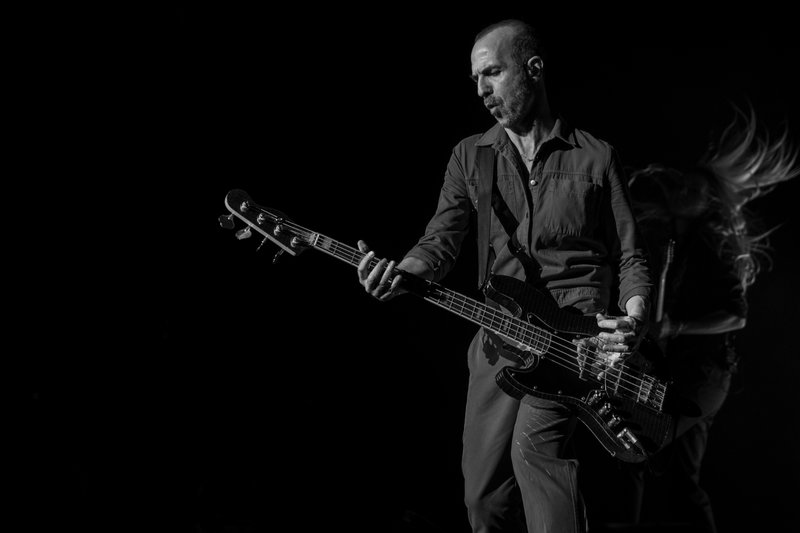 The concert ended gently with “En apesanteur” which Calogero performed acoustically on guitar.

All good things having an end; and under the stroke of midnight, the publicjust regretting that the concert was too short and that some of the artist’s essential hits – “Take root”, “Fundamental”, “If only I could miss him” – left Fourvière as one man with stars in his eyes, as well as tubes in his ears!

All the singer’s talent for simply conveying strong and current themes was once again highlighted in a concert like his latest album, namely in a mixture of energy, hope and optimism. 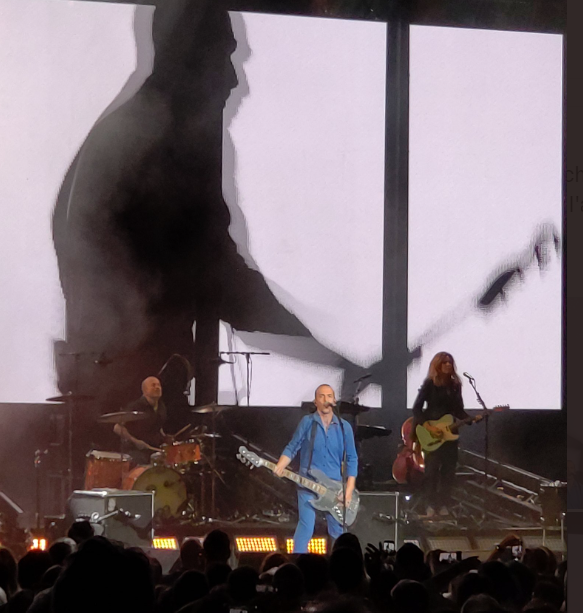 “Faced with this world that is going badly, it is our responsibility, as artists, to give pleasure to people”,: affirmed the artist from Grenoble to present his brand new tour to the press: it is an understatement to say that the challenge has been met 100,000%!

Certainly, the spectators present at Fourvière on June 28, 2022 will once again have been able to measure how Calogero remains firmly rooted in its time!

Calogero in concert at the nights of Fourviere on Tuesday, JUNE 28, 2022

** we see that as Calo points out at one point in the concert, the artist likes to surround himself with women in all the key positions on his tour