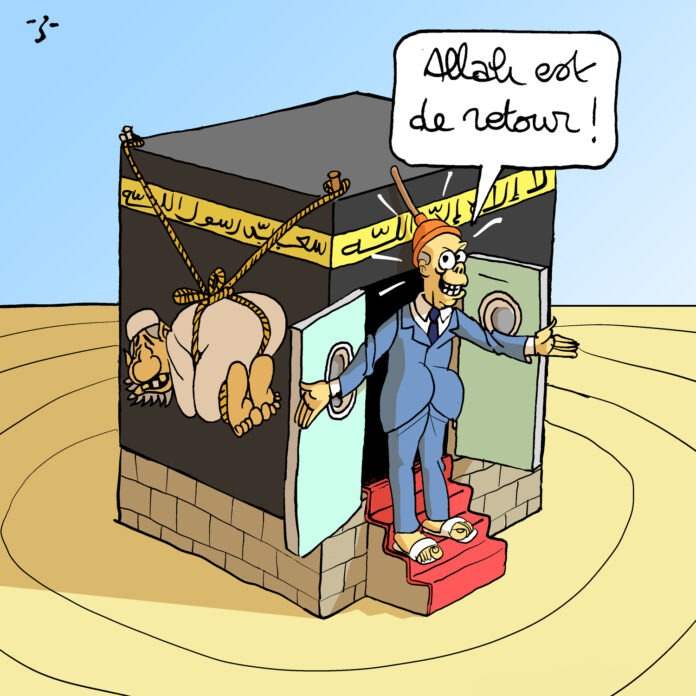 Many commentators in France wanted to see in the draft reform of the Tunisian constitution concocted by President Kaïs Saied and submitted to referendum on July 25 a desire to turn their backs on any reference to Islam. Nothing could be further from the truth since the Tunisian head of state, more religious than the Muslim Brotherhood driven out of power, has just announced that the constitutional text would affirm Tunisia’s membership of the “community of believers, known as “Umma”. .

Chronicle and illustration of the cartoonist “Z”

On July 25, 2021, ZABAIED (1) overturned the table and took full powers. Paradoxically, the Tunisians looked favorably on this demonic force, because ultimately a miracle of this type was needed to drive out the evil Islamists. The despair of the Tunisians was such that they closed their eyes to all the excesses that followed.

Because Saïed has become a dictator like Ben Ali and Bourguiba, but this time the man is showing even more disturbing signs: Saïed is more and more obsessed with Allah. He explains that he acts first for the Almighty. He animates Quran reading prize-givings in the castle and orders the cops to punish the cafes open in the middle of the month of Ramadan. He quotes the sacred text, anecdotes from the life of the prophets and accuses his enemies of heresy.

Kaïs Saïed, defender of the “Umma”

But many Tunisians, even the most progressive, continue to see hope in him. They have been made to believe that he will remove the mention of Islam from the first article of the Constitution (which he has decided to rewrite, by the way). Their desperation has made them so blind that they have not understood at all that the one who drove out the Islamists takes himself squarely for the prophet. To put an end to all the rumours, Saïed announced in his last media appearance at Tunis airport, on June 21 at six o’clock in the morning, in front of pilgrims leaving for Saudi Arabia, that he was going to inscribe the notion of “Muslim Ummah” (“community of Muslim believers) in the text. Moreover, the Tunisian President affirmed that “the State must work to accomplish the aims of Islam and Sharia”

It adds in fact even more Islam to the Constitution, and distances Tunisia more and more from a social project where Allah, the prophet, the marabouts, the spirits, the angels and the demons would remain forever confined in the ancient basement of the Palace of Carthage.

The Curse of the Palace of Carthage

As it seems very distant this time when newly elected President Saïed refused to settle in the palace of Carthage. Claiming his closeness to the people, the latter wanted to stay in his modest villa in the Mniha, in the northern suburbs of Tunis. The presidential services were going crazy fearing for his safety, but Saïed insisted. The presidential escort between his house and the palace daily blocked traffic in Tunis, angering local residents. After a few days Saïed had to resign himself and moved with his wife and children to the castle.

Kaïs Saïed must have known that this house was inhabited by evil spirits. From Bourguiba to Essebsi, history shows that all the tenants of the palace were struck by a curse. Of course, different for everyone: we especially remember the passage of Ben Ali (23 years old) in which the presidential complex had become a real landmark of sorcerers and marabouts at the request of Leila Ben Ali, his wife, who had tried in vain to chase away evil spirits.

We also remember Moncef Marzouki, nicknamed “Tartour” by the Tunisians, who has since lost his ball and still hasn’t recovered. Same for Essebsi, successor of Marzouki and now deceased, who had to invoke all the saints of Tunis to protect himself. But it didn’t work as planned and he died in office under strange circumstances.

This explains the legitimate fears of Kaïs Saïed, this honest law professor forced in spite of himself to live in this haunted house.

Unfortunately, we were not mistaken: the Tunisians have been witnesses since his move to his progressive metamorphosis. The spirit first manifested in the president’s own body.

The whole country noticed the ball which suddenly swelled in Saïed’s belly, as if the spirit had settled in his entrails (Perhaps Saïed, does he bear the descendants of the demon of Carthage?). Then, it was these facial expressions, his gestures, his gestures that transformed this peaceful professor into an unrecognizable monster, belching day and night against the traitors and the corrupt of the nation..

In any case with Saïed, the spirit of Carthage not only spread throughout the country (to see all these “zombies” who adulate the president), but it would have mutated altogether, manifesting a singular form that Tunisia does not has never known since Bourguiba in Essebsi.

In conclusion, for the next Revolution, it would be necessary to plan to raze the palace and to carry out excavations on the whole of the archaeological site of Carthage to elucidate the mystery of this evil spirit which persists in Tunisia and which drives crazy those whom destiny places them at the head of the state…

(1) ZABAIED is the contraction of ZABA (acronym of Zine El Abidine Ben Ali, the former dictator) and SAIED, the current Tunisian president accused of authoritarianism.

Tunisian President Kais Saied facing the people in the street

Kaïs Saïed fires the Islamists, but brings in Sharia through the window