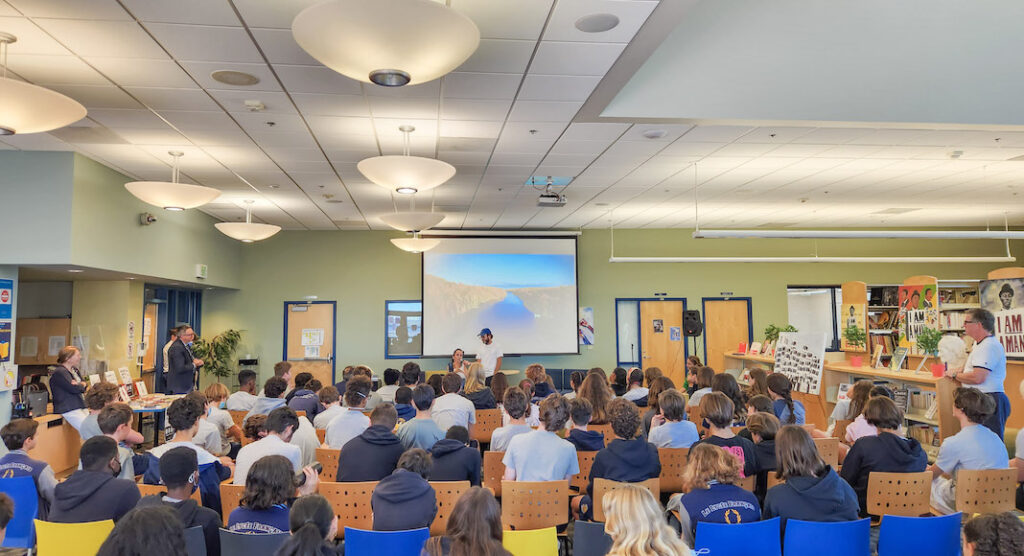 Television host and producer Jérémy Michalak, who has been living in Los Angeles since 2020, has just wrapped filming the fourth episode of his documentary series alongside Lucie Carrasco, a French designer diagnosed with spinal muscular atrophy, a degenerative genetic disease that requires you to move around in a wheelchair.

Shot in Southern California, the film, which should be broadcast next summer on France 5, takes the duo on a grand tour between Los Angeles, the Temecula Valley wine region, the salt lake of Salton Sea, Slab City, Bombay Beach and the Big Bear area. ” An epic journey, says Jérémy Michalak, where the main idea is to shake up stereotypes about disability, to disregard assumptions, to send a positive message. Lucie is a funny, reckless, adventurous and endearing character. And our common desire was to show that disability is not only painful on a daily basis. »

Fifth road-movie after the crossing of New York-Los-Angeles, Japan, Brazil and Canada, the new adventure succeeds perfectly in the challenge of de-dramatization, ” partly thanks to our two personalities, continues the director. We had to heart to be politically incorrect, to talk to each other cash like two friends, to play jokes, to be sincere and authentic, in short to be on the same level. By creating filters, we always remove flavor from encounters. »

In this Californian episode, the duo also sets out to meet characters who punctuate their journey, “ you will meet Tracy, a 64-year-old Californian, hip-hop fan, glued to her armchair because she suffers from multiple sclerosis but galvanized by an incredible energy, not hesitating to face the Venice skate park, alongside the best and telling everyone that his disability is the best thing that has ever happened to him. A way to open new perspectives on the subject…”.

7 years after the broadcast of the first issue, Jérémy Michalak had worked for 4 years before seeing his project finally produced (the first in 2015). ” At the time, I was producing “Les anges” and “Allô Nabilla”, and it was Lucie who came to me to tell me about her plan to accompany her on her trip to the United States. It took me a long time to pick up my phone, discover the character, his anti-ghetto and anti-communitarian discourse around disability. The feeling immediately passed, but the TV channels, including the public service, all refused. A documentary on wheelchairs might not get an audience, I was told. “And then there is already the Telethon”. It was ultimately Richard Lenormand, then CEO of the Lagardère group’s radio and TV division, who co-financed the first project with me.. »

Presented in early October to students at the Lycée Français de Los Angeles and LILA (International School of Los Angeles), the episode shot in Canada, “Lucie in caribou country” made it possible to raise young people’s awareness of disability issues. ” Going to meet them gives meaning to our project, concludes Jérémy Michalak. This allows you to age less stupid. To the question of a child asking Lucie if she preferred to walk or stay in an armchair, Lucie’s answer, overwhelming and surprising, sums up the state of mind of our collaboration: “I have never walked, I don’t know what it is. What I do know, however, is that my chair makes me unique and different. It’s my super power. We all have a super power within us.” »