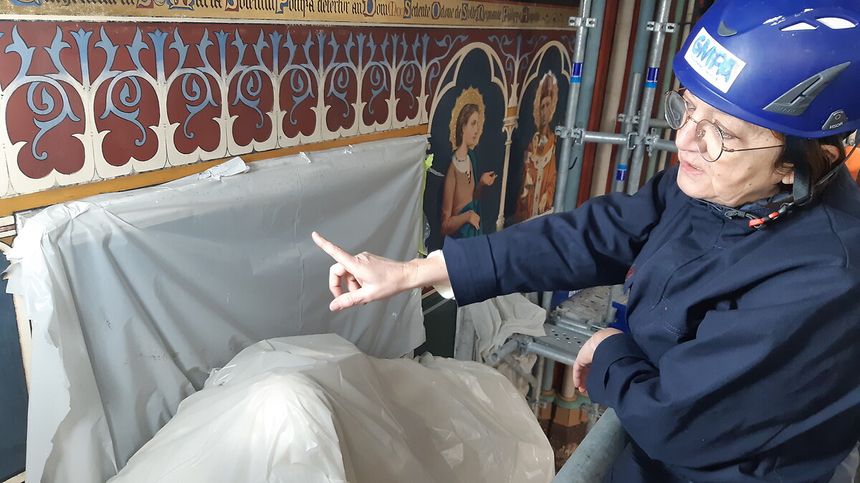 At Notre-Dame, it is the fairness of the stone that is now obvious. Despite the still ubiquitous forest of scaffolding, the latex cleaning has had its effect and the clarity of the stones changes the brightness of the construction site, inside the monument. The cathedral which must find the public at the end of 2024 is not yet rebuilt, but already

Brilliantly colored paintings in the chapels

First step to realize it: the chapels of the ambulatory. The work of the mural restorers produced its effect on the dirt that had hidden their vivid colors from the public. “What is extraordinary is that each chapel has a different color range, it’s a nice surprise” comments Marie Parant, restorer of mural paintings, at the head of the group of restorers in charge of the site.

The paintings, which date from Viollet-le-Duc, are known and documented, but the cleaning surprises even the regular restorers. “For example, for the facings at the bottom, we imagined it to be green or blue. And then, in the end, it was a red“shows Marie Parant.

The result is already visible: an explosion of colors in the 24 chapels that surround the choir of the cathedral. Damaged by the years, not affected by the fire, the drama allows them today to regain their brilliance. “As they say, it’s a blessing in disguise, we have the possibility of restoring everything. What is exceptional for us is that we restore everything at the same time: the stone, the mural, the stained glass and when we leave the site, we will have the impression of complete completion” smiles Marie Parant.

On the forecourt of the cathedral, other craftsmen savor their exceptional work. Giusipenna Genna thus leans on a chimera, which was on the facade of Notre-Dame, “the alchemist”, specifies the restorer of stone sculpture, site manager for the company H.Chevalier.

“He’s in pieces” she shows: “nour job today is to glue it back together, we just attached the heads, the hands, the arms“. A little further on, heads of angels have been molded to reproduce the four that appeared under the vault at the level of the occulus, the center of the crossing of the transepts, which collapsed with the spire during the fire.

“The sculptor will use the two still existing angel heads to recreate copies on the stones that we will put back in place“explains Arnaud Morançais, site manager of the Lefevre company, in charge of the masonry and cut stones.

With him, you have to take the elevator on a scaffolding to admire one of the first symbolic stages of the reconstruction: the vault of the North transept now completely closed by his teams. “It’s really an important stage of reconstruction, we are healing the wounds: we are no longer in the consolidation or in the securing, we are really in the phases of rebuilding the parts that have suffered the most following the fire“he believes.

“It is the first stone of the real rebirth of the cathedral, we close a wound” comments Philippe Villeneuve, chief architect of historical monuments.

A few meters away, still at the level of the vaults, a gaping hole still occupies the base of the future spire of Notre-Dame. But wooden hangers were laid on a floor. They will soon be covered with the vault of the transept, which will be completely rebuilt in the weeks to come.

Scaffolding is also being erected from the ground of Notre-Dame. 100 meters high, 600 tons: it will grow as the spire is rebuilt within it, starting in April 2023.

“Even in 1864 when Viollet le Duc returned the cathedral, it was not as beautiful as it will be!“ advances for his part Jean-Louis Georgelin, president of the public establishment in charge of the construction site of Notre-Dame de Paris, which guarantees a reopening of the cathedral at the end of 2024.

And while the advances are currently invisible to the general public, 2023 will satisfy curious eyes: “What will seize public opinion is that we will see the scaffolding pierce at roof level and the arrow that will grow inside, it will strike the spirits a lot“.

IN PICTURES – Notre-Dame de Paris: the impressive progress of the construction site