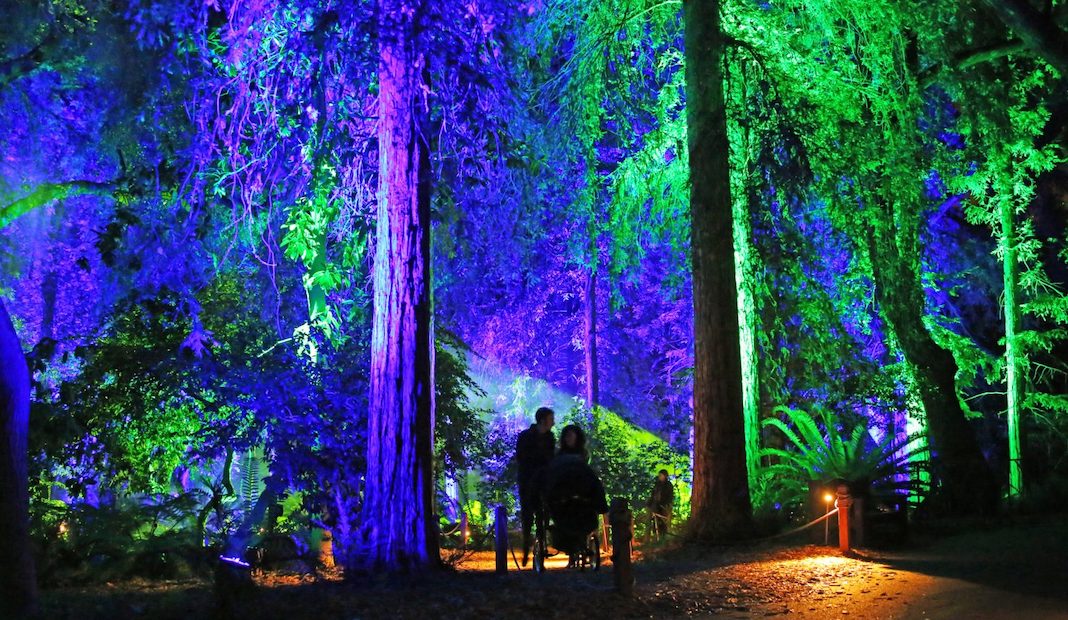 Illuminations, boat parades, Christmas markets, shows… The City of Angels is adorned with a thousand lights as the end of the year festivities approach. French Morning has selected outings to do with family or friends to immerse yourself in the Christmas spirit under the palm trees.

A forest of light at the Descanso Garden

In the darkness, trees take on strange blue or purple halos. Under the amazed eyes of the children, a bed of electric tulips lights up… Welcome to the enchanted forest of light (The Enchanted forest of light) from the Descanso Garden! Until Sunday, January 8, the Botanical Garden (between Pasadena and Burbank) offers a one-mile nighttime stroll through these magical installations. Young and old alike can admire a city of colorful stained-glass windows in the Rose Garden, sparkling geometric designs on the Main Lawn and play of light in the Ancient Forest. Entrance every half hour, from 5:30pm to 10pm. Tickets must be purchased in advance (34 to 40$ for non-members, 22 to 28$ for members). Descanso Garden 1418 Descanso Dr, La Canada Flintridge, CA 91011

After two years of absence, Holiday Ice Rink is back in the heart of Downtown LA! Until January 8, experienced and beginner slide enthusiasts can set off on the largest outdoor skating rink in the city. Wednesday evenings from 7pm, DJ HowLy and his vibes will warm the ice cream. Please note that the ice rink will be open on Saturday 24, Sunday 25 and Saturday 31 December, as well as Sunday 1 January. $20 admission, skate rental included. Pershing Square, 532 South Olive Street Los Angeles, CA 90013

This iconic Los Angeles tradition celebrates its 100th anniversary this year! As Christmas approaches, the historic Cedars (Deodar trees) that line Santa Rosa Avenue in Altadena, north of town, are lit with fairy lights for almost a mile. All thanks to the titanic work of a neighborhood association. The 100th ceremony of the christmas tree lane d’Altadena, which marks the start of the illuminations, will take place on Saturday December 10 at 6pm at the Public Library. A winter festival will be held at the same location from 3pm to 9pm with drinks, treats and craft sales. Free admission. Altadena public library, 600 E Mariposa St, Altadena, CA 91001

Escape to the mountains at Santa’s Village

1h40 drive from Los Angeles, towards the mountains and the forest near Lake Arrowhead. This is where Santa Claus Village is nestled, Santa’s Village, at Sky Park. In winter, this small theme park can be dusted with snow, which adds to its charm. The entertainment is in full swing there as Christmas approaches until Sunday 8 January. Visit of Father Christmas’s house and workshop, ride on a little train, tea with Mrs Claus, shows, cookie or decoration workshops… A day outing in the heart of an alpine landscape to make the youngest and their parents. $69 adult ticket; $59 for a child (4-12 years old) or senior (60-74 years old) ticket. Parking $10. Santa’s Village, 28950 CA-18, Skyforest, CA 92385

Of fairy christmas boat parade (Christmas boat parades) are held in several port towns near Los Angeles. That of Newport Beach, an hour’s drive south of LA, attracts nearly a million spectators each year. Her 114th edition, organized by the local Chamber of Commerce, will take place from Wednesday 14 to Sunday 18 December every evening from 6pm. A hundred boats, yachts, kayaks and canoes will compete for the prize of the most beautiful illuminations as well as the houses, which will form a ring of light (ring of light) around the port. You can buy tickets (quite expensive) for boat cruises… Or admire the show for free in the crowd. Plan to arrive early and wear warm clothes. Newport Beach Harbor.

A French Holiday market in Zebulon

For the second consecutive year, the French school Coucou French Classes organizes a Christmas market at Café Zebulon, in Frogtown. Sunday, December 4 from 11am to 5pm, French designers based in LA will offer culinary and pastry specialties, lingerie, children’s clothing, decoration… The opportunity to do your Christmas shopping and spend some time convivial with other French people. Zebulon, 2478 Fletcher Drive, LA

A private tour of LA

It’s a real summary of the end-of-year celebrations in Los Angeles. Until Tuesday, January 3, the French travel agency Los Angeles Off Road – specializing in unusual routes – offers a private visit and transported for 4 hours to immerse yourself in the Christmas spirit through the City of Angels. On the program: festive atmosphere in Downtown LA; the illuminations of The Grove shopping center and the culinary specialties of the Farmer’s Market; Candy Cane Lane and Holiday House. Starting at $559 for 6 people. Visit accessible to people with disabilities.