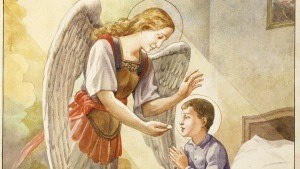 Saint Gemma Galgani’s method of unmasking demons who pretended to be angels was a bit peculiar. This earned him a nice wink from his guardian angel!

Canonized in 1940, the young Italian mystic Gemma Galgani is a disturbing saint. Born in 1878, she died in 1903 at the end of a life of suffering linked to illness, the impossibility of entering the convent as she wished, demonic vexations of all kinds and the stigmata she received every night. of Friday. Some have even tried to reduce his mystical experiences to a pathological case. They were, however, perfectly and scrupulously studied during his lifetime, both by the Church and by medicine. Among the “disturbing” phenomena that marked his short existence, his relations with the angelic world are not the least surprising. When her confessor asks her to tell him about her guardian angel, Gemma sighs: “He is a bit harsh, my angel…”

She means by this that the blessed spirit that watches over her like a mother hen, does not pass her anything, in a desire to push her to the highest peaks of contemplation. Even if it means bullying her from time to time and making scenes with her, followed by obstinate sulks, which leave her panting with grief. Angels, it is better to know, do not always have a good character, when they consider that abruptness and reprimands are in the interest of their protegee.

One day when the young girl, who leads an almost cloistered existence, complains of not seeing anyone, the guardian angel replies: “When you want to talk to someone, talk to Jesus, or talk to me! and, to vary the conversations, he sometimes brings other good angels with him. This proximity gives ideas to the demon, never very far from Gemma since the day when, when he promised her healing and the goods of this world, she chased him out of his room, replying: “My soul comes before my body ! He does not miss an opportunity to take revenge on her, hitting her, trying to drown her in the garden pond, causing her to fall. In vain since the guardian angel always arrives in time to save her from danger.

A smile and flowers

These angelic visits give him a new idea: to introduce demons disguised as angels of light into the entourage of the mystic. Some of the damned spirits, indeed, the strongest and most powerful, manage, momentarily at least, to regain their pre-fall appearance. The resemblance is sometimes so perfect that Gemma can no longer distinguish the undesirables among her visitors. Taken into his confidence, his confessor gives him unexpected advice. He who, in his respect for the celestial world, forbade her to use familiar terms with her guardian angel, forcing her to use, when she speaks to him, the third person of majesty, the Italian equivalent of formal address, now asks her, at the slightest doubt , to spit in the face of the angel.

But one day, Gemma is gripped by a terrible doubt: is the spirit that has just appeared to her, her dear guardian angel, or one of the funny villains that have arisen from hell (…)?

The method is a little brutal and Gemma, well brought up, very confused to resort to it, but she obeys. In general, she is not mistaken and, when they are spit in the face, the demons, mad with rage, disappear, uttering horrible imprecations. But one day, Gemma is seized with a dreadful doubt: is the spirit that has just appeared to her, her dear guardian angel, or one of the funny bad guys from hell who would have found it funny? borrow his appearance?

She doesn’t know, she doesn’t know anymore, she hesitates… and the angel who looks at her with a small smirk, without doing anything to help her. Finally, she resolves to spit in his face, as his confessor has requested. The angel does not disappear, he does not shout, he does not insult him. He looks at her and he smiles. Scarlet, Gemma doesn’t even dare look at him anymore; she spat in the face of her angel, he who does not have an easy character! What a disaster… Eyes lowered, Gemma remains taken aback; where his spittle fell, a white rose, of incredible beauty, appeared. On its petals, written in gold letters, it deciphers these words: “We receive everything from love. “A motto that will remain his until his last day.

Gemma’s angel: “We get everything from love, even spitting”