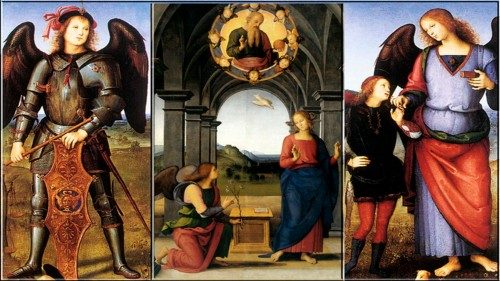 Every October 2 marks the liturgical memory of the holy guardian angels. Back on the mission of these ambassadors and spiritual protectors, servants and messengers of God placed at our side, and “who only ask to listen to us”.

“From the beginning of existence to death, human life is surrounded by their custody and their intercession. Each faithful has at his side an angel as protector and pastor to lead him to life.said Saint Basil the Great (330-379 AD).

The existence of angels is a truth of faith. Defined as purely spiritual and non-corporeal beings, they surpass in perfection all visible creatures, as stated in the Catechism of the Catholic Church.

Pope Francis has spoken many times about their existence, reminding all the importance of maintaining a relationship with one’s guardian angel, whom the Holy Father considers “a daily door to transcendence“.

What role do guardian angels play in spiritual warfare, why is it important to address them, and how to do it? We put the question to Father Jean-Christophe Thibaut of the Diocese of Metz, otherwise known by his author name, Michael Dor (Tetralogy The Gate of Angelsand other novels).

– How do guardian angels manifest themselves in our lives?

Guardian angels manifest themselves in our lives in a discreet way. The nature of angels is to be by our side, not to do things for us.

They have two missions: to represent us before the Lord, a bit like spiritual ambassadors, and then, to protect us. They support us particularly in spiritual combat, against the forces of evil.

They can also influence us in a discreet way, bringing to mind a number of positive, supportive attitudes that trigger hope.

– How is the angelic world hierarchized?

God created the visible and invisible world. The angelic world was created at the same time as the Earth; men were created second. They are our elder brothers in Creation. They are pure spirits, organized into nine choirs of angels. It is not a hierarchical organization, it is simply “different“. There are the angels, the archangels… Among the angels are the guardian angels, attached either to a man, a family, or even a country. We know, for example, the guardian angel of Portugal, who revealed himself to the children of Fatima. There are also the seraphim, the cherubim… The other angels sing the praise of God, they are mediators between God and man.

– What is their role as angels in the struggle between good and evil, in the spiritual combat at work on Earth, and which everyone must carry out?

They are on the front line insofar as the spiritual warfare began with them. Angels are autonomous and free, they belong to the preternatural world with a certain number of faculties. Like man before original sin, they possess a perfect and total knowledge of things. They are not marked by time.

In the knowledge they have of God, of the truth, they have the freedom to accept or refuse the mission they receive. A number of them therefore turned against the Creator at some point. The best known of these rebellious angels was called the devil, diabolos, – the one who separates – or also, Satan, sheitan, which means the adversary – the one who opposes. These fallen angels are called the daimon, the demons. They try to drag the man down with them. The fight of the angels is therefore at our side to counter this spiritual struggle waged against man, more than against God for that matter, to bring him down, through temptation, fear, seduction, constraint…

– Why so many people, including some Catholics, find it hard to believe in angels, and will reduce them, at best to folklore, at worst to esotericism?

The word angel, angelium, is particular. It designates more a function than what they “are“. Those are “spiritsas Saint Augustine said,envoys“.

Admittedly, we often try to picture angels as creatures with wings, iconographically. Of course, at some point, we thought they were more mythical, symbolic, than real. There is therefore a kind of questioning of this invisible world in our contemporary world. A rational tendency, influenced by the development of the human sciences in the 20th century, among others, going so far as to question exorcisms as well.

At the same time, esotericism, the New Age in the second half of the 20th century, rehabilitated the figure of the angel in its own way. This is why one must be very careful with the books on angels distributed on the market: six out of ten are far-fetched, far from biblical thought.

Fortunately, the Church’s position is clear. You only have to read the Catechism of the Catholic Church, which takes up the question of angels very precisely, and reaffirms that their existence is a truth of faith. They are present in our Credo. If one is a believer, one cannot deny the existence of angels, nor that of fallen angels or the devil. All the last Popes each recalled the importance of the existence of the angel. It is not because it is discreet, that we do not see it, that it does not exist.

– What is the special power of praying to angels?

The prayer is always addressed to God, but it is carried by the guardian angels. When we pray to the angels, we ask them to intercede for us, to be close to us. One of their functions is to represent us before God, but they also have this function of spiritual protector.

There is no particular veneration of angels. We must give them the opportunity to exist and fulfill their own mission, address them, make them present, because they do not impose themselves. It is important to remember that they are there.

Guardian angels are a grace given to us by God. It is a gift given to us. You have to know how to receive it. Talk to your guardian angel, entrust him with certain things, let him mediate graces for us. There is a presence, which one must know how to use.

The Universal Church celebrates Saints Michael, Gabriel and Raphael each September 29. These three archangels are present in the Bible in varying degrees. Pope Francis has…

Feast of the Holy Guardian Angels: Giving them the possibility to exist – Vatican News