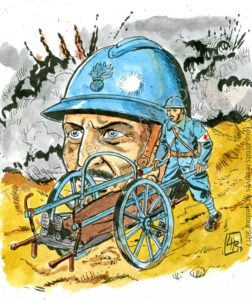 Like last year, Ar Gedour leaves the pen to occasional readers and contributors, allowing you through their words to immerse yourself in the Christmas spirit. The card is totally white… only the theme is imposed: Christmas. Here, it is Eric Le Parc who offers his pen.

Lgrass, or rather what’s left of it. The barbed wire, the shell holes, the rotting corpses that no one had the courage to seek out to offer them a burial worthy of their courage. There are also the corpses that are still moaning and just waiting for a German bullet to shorten their sad agonies. Today is Christmas so normally the day should be calm. There are here and there some semblance of decorations in the trenches but the heart is not really there.

Gildas watches the enemy lines tremblingly through a pair of binoculars. The nights are short. His uncomfortable and damp diaper, there is the cold, the rats, and the more abominable nightmares each other when Morpheus deigns to take you.

This morning it’s Christmas so it’s quiet. The Boches do not move, also buried in their trenches.

Tomorrow, it is a question of giving the assault. Yesterday it was those opposite. They held on, but it was a hell of a bloodbath! The bugle, the grapeshot, the cries, the howls, the explosions, the thundering cannon. The fear. The abominable dread.

The Ankou who ran from side to side with his creaking cart, scything in all directions. His cursed cart was almost too small! And her horse too frail to pull her without getting her hooves caught in the ruts.

The Ankou, that damned old Ankou. From time to time he goes to grill one with the guys to rest a little between two trips to the afterlife. Here the Ankou is almost a comrade! But today, he will exceptionally be replaced by baby Jesus. In this arm of the trench, we are among Bretons so we have all heard of him, we have things to tell each other, we pray together, we rely on all the possible saints so that the day dawns again tomorrow.

Gildas tries to put on a good face, he pretends. Guys also pretend. A healthy fraternity that binds together to better resist and hold on. Sometimes we break down, sometimes all these horrors are stronger than courage so we break down, we break down in tears and then we get up. It happens ! But you have to hold on! Especially in front of the officers.

We fight for the country! For our families! For all that is most sacred then you have to be strong! Do not crack! Do not Cry. Young Louis slaps him on the back, helmet on head and cigarette in mouth.

Gildas has just turned twenty-five in the middle of this hell. Twenty-five years… The guys had given him a little party while waiting, maybe to celebrate his twenty-sixth birthday at home. He laughed bitterly. Perhaps it will fall tomorrow or the day after, in a week or in a month.

He wonders with a tear if he will only see his wife Naïg again one day and their little boy born just before his departure. Here this question, everyone asks it at least ten times a day!

Today is Christmas so it’s quiet. The guys look at each other, their eyes haggard, cold and eaten up with fear. Today is calm.

A little cig, a swig of big red to hold on until death comes to take you and time keeps ticking away. The sun shines in an almost blue sky, not hot enough to dry anything. If the Boches don’t kill us, it will be sickness… or else madness, who knows.

He, Gildas, thinks of his wife who, if he comes back one day, may find it difficult to recognize him. Thin, bruised on all sides, eaten away by all sorts of ideas that courage alone cannot overcome. How is such a thing even possible?

In a week others will come to relieve them in this front line gut, but in the meantime we have to hold on.

You have to keep an eye on the Teutons without letting yourself be discouraged by the buddies who are lying in the broken earth in the middle of pools of blood, nor those who have remained nailed to the barbed wire and whom the enemy grapeshot has shredded for an eternal rest.

Rest… rest… no rest here! We wade through the slush, we advance, we retreat, we shoot at the enemy soldiers who have the misfortune to run towards us, rifle in hand. They must not be better than us poor people! For them too it’s mud, cold, hunger, fire, rats. Them and us, we’re in the same boat, except that we shoot each other brotherly.

Gildas always keeps his wife’s letters with him, and a photo of her embedded in a small medallion. It’s his treasure! The mail arrives when it wants so what we receive we keep it preciously!

A clamor! An officer who presents himself proudly.

We’re going to attack! Nope ? Not on Christmas Day?

The bugle sounds. You have to take them by surprise.

The fear begins to mount.

Some start crying, but everyone is getting ready.

Gildas clutches this little medal with all his might, holding back tears: Virgin Mary, Lord and all the saints in heaven, baby Jesus born on this Christmas day, all the angels have mercy on me! Have pity on my wife and my son!

A moment of silence.

Nobody in front moves.

The bugle, the din, the bayonets with rifles. Everyone rushes off. One runs. The gunshots. Comrades who fall.

His knee explodes. He falls in the mud right in the middle of a shell hole. The guys continue to fall in the crash and grapeshot. He makes a superhuman effort not to scream. Like a madman he uses a piece of his uniform to improvise a tourniquet and he waits. He waits in pain, cold and humidity.

The smell of gunpowder, the stench of blood and corpses. He recites a few prayers, where he is he doesn’t eat bread and then tonight he will try to crawl to his trench. Hopefully he’ll make it and we’ll send him to a rear hospital. It’s Christmas…

The wife of the late Yves Rénier, 21 years his junior, still "breathes" his pillow, a year after fin...
DeMar DeRozan reflects on his discomfort at the Free Agency 2021
Letters to the Editor—September 4, 2022 - CNET
Tweet
Share
Share
Pin