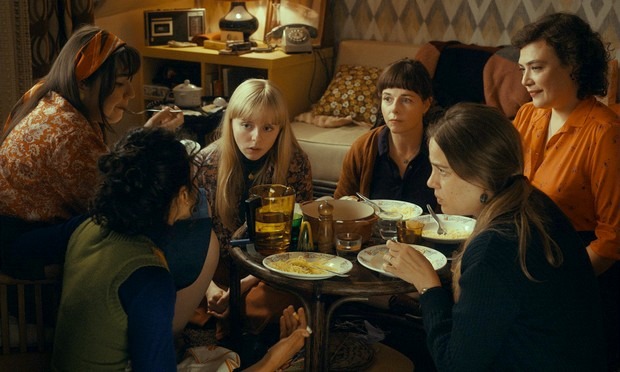 Some battles are worth fighting over time. Since freedom, this precious good, permanently runs the risk of being undermined by obscurantist forces of all persuasions, a film like Annie Anger is more than ever urgent, useful and necessary! The crusade that director Blandine Lenoir leads there may well be that of women, the exclusive victims of savage practices of termination of pregnancy until the legalization of abortion in France in the mid-1970s, her third feature film is so generous and benevolent that it could almost serve as a universal example of the ideal film about activism. While the adversary of the characters, pushed to the limit by their inextricable personal situation, remains essentially outside the frame, as a leaden screed of the dominant position of men within patriarchal civilizations, the feminist response is organized in a way impressive.

However, around a social subject that is at the very least delicate, even potentially divisive, this very beautiful cinematographic pamphlet hardly shows any tendentious zeal. From the observation that these women in trouble were going to have an abortion anyway, even if it meant losing their lives, the plot follows without the slightest prejudice the soberly exemplary journey of a mother who quickly makes a career in her movement against the clandestine nature of these practices. Except that Annie’s investment is above all a matter of social commitment. Her path will therefore not lead her to the barricades, but to the school benches, to make up for all the opportunities that her modest condition as a worker had made her miss before.

Before arriving there, she becomes the privileged witness of an uprising of indignant women, which the government will no longer be able to ignore. All the quality of the film then consists in largely ignoring political speech in order, on the contrary, to remain as close as possible to the gently rewarding daily life of these shadow fighters.

Synopsis: In January 1974, a few months before the adoption of the Veil law, Annie resolves with the agreement of her husband to have an abortion. Since this practice is forbidden to the medical profession, she appeals to the MLAC, an association which offers free abortions in a town neighboring hers and using new methods that are not very painful. While Annie is completely satisfied with the operation, she finds it hard to give up her family responsibilities in order to come and lend a hand to the women who welcomed her so well in her moment of despair. However, her militant fiber awakens brutally, when a tragedy in her entourage makes her feel the injustice that hundreds of women suffer every day across the country.

Once the bias for women’s equal rights is evident, Annie Anger advances like on rails towards its galvanizing destination. Unlike a hypothetical American counterpart – perhaps even more essential these days there, when the right to abortion is seriously threatened there – Blandine Lenoir’s film avoids any heroic emphasis in order to reflect the valorous struggle of these women of the ’70s. The central figure is certainly Annie, a role of finesse and sincerity as only Laure Calamy can release them in all modesty, she is tirelessly part of a group effort that can only bear fruit collectively. In the recognition of this vital solidarity between women, pushed to the wall by unscrupulous men, lies her first feat of arms.

From then on, she will make every effort to pass the baton: to the women who have dared to raise the curtain of the permanence hidden in the back of a bookstore, as she had done at the start of the film, and even to her own teenage daughter, in a magnificent gesture of rewriting the contract of generations in terms of sexual knowledge. The major asset that the narration brings down with a keen sense of good measure consists in never over-dramatizing a subject immediately prey to fiery positions. The operation of dedramatizing what some narrow minds may consider to be deeply immoral works wonderfully there, also thanks to the disarming enthusiasm with which the actresses inhabit their precursor characters.

At first glance, Zita Hanrot and India Hair on the women’s side and Eric Caravaca and Yannick Choirat on the men’s side don’t have much to do. Their radiant presence, committed but fully aware of the mountains to be moved before arriving at an acceptable change in the status quo, is nevertheless enough to give a soul and many faces to their historic mission. Without forgetting these numerous patients, with perfectly assumed anonymity and screen time reduced to the essential, who operate as so many proud and courageous representatives of a falsely shameful unsaid.

Nothing is free in life

Because the management of the permanent emergency, week after week, over which the women volunteers toil in Annie Anger should in no way make us forget the nauseous substance of this problem as old as the world. Fortunately, the director knows that there is no point in forcing the line in such a polarizing field. This does not mean that it obscures the real issues, even more apparent through a color of the most convincing period, from the coffee maker to the calculator. So it’s women who make the world go round – is it really that hard to recognize a frying pan, Mr Unionist and rather open-minded husband? –, but they are not the ones who have a say in an essential matter of their lives.

The speech of Delphine Seyrig, a true feminist muse of the time, whom the militant girlfriends watch with enthusiasm on television, then seems emblematic of certain missed appointments between the female and male sex over the decades. What the actress of Last year in Marienbad it says is most truthful and would probably not raise much controversy these days. Just the in no way equal device in which she states her disarming observation, a TV set populated by men of a certain age, strongly attenuates the impact, the spirits of half a century ago – and perhaps be even those of all time – being unwilling to hear a woman speak so freely.

Hopefully the almost casual approach of Annie Anger will have a diametrically opposite effect. By its freedom of tone and its unfailing commitment in favor of its characters first and the cause against clandestine abortion only afterwards, Blandine Lenoir’s film simultaneously gives a great lesson in cinema and civics. With again and again this extraordinary ability to convey an essential message in the most subtle of ways. Neither melodramatic slice of life, nor coarse and tendentious preaching, this film managed to move us to the depths of our young militant being, thanks to its unparalleled human aspect.

For us, the Albi Festival is unfortunately already over. What a relief then to carry in our luggage the memory of a film as fresh and curiously light, as serious and sure of its target to be reached as Annie Anger ! Blandine Lenoir excels in making the drama of the angel makers’ prey accessible, while inscribing this feminine tragedy in a beautiful learning novel, within everyone’s reach. Because what Annie accomplishes there is nothing other than the acquisition of a conviction, which she had the opportunity to forge gradually, without ever playing the extravagant heroine. After all, isn’t that what every man and woman should aspire to sooner or later: to make themselves useful, without putting themselves forward, but by serving according to their abilities a cause perceived as just?

And, without question, the mystery of godliness is great: he who was manifested in the flesh, justif...
Christmas 2023: this decorative object will be everywhere, even in your tree
A surge of Quebec whiskey is about to flood the market
Tweet
Share
Share
Pin