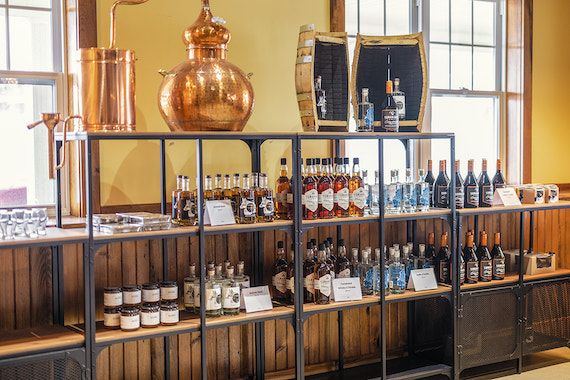 Display of Quebec whiskeys in a specialized store. (Picture: courtesy)

QUEBEC ALCOHOL INDUSTRY. It’s a poorly kept secret: many distillers in Quebec hide barrels out of sight, often in the basement. Not in the spirit of suspicion of prohibition, but because many of them are patiently waiting to be able to present their whiskeys to Quebecers.

The minimum sentence: three years and a day. This is the duration of aging in barrels so that “moonshine”, grain alcohol copied many times during the prohibition era, can claim the term whisky.

As Quebec’s distillation industry has grown from a handful of insiders at the turn of the 2010s to over 80 industrial license holders by 2022, the whiskey wave is expected to overwhelm Quebec over the of the next few years.

“There are distilleries that have been around for three or four years that we consider veterans,” laughs Simon Bourbeau, director of spirits and celebratory products at the Société des alcools du Québec (SAQ). If he believes that “2023 will still be a good year of growth”, he especially believes that it is in 2024 that there will be “a significant boom”.

On the shelves of the SAQ, 36 Quebec whiskeys are currently offered. More than 36,000 “standard cases” (36,000 times nine liters or 12 bottles of 750 ml) were sold this year. Among them, seven new products (Sivo Sélection Rye, St-Laurent 3-year-old Rye or Monkeenuts, flavored with peanut butter) contributed to an increase in sales of around 6% in this product category.

“To visit distilleries, I see the barrels. At the Côte des Saints distillery in Mirabel, [ce sont] hundreds of barrels that will be ready to be marketed shortly, says Simon Bourbeau. Others age products for testing or small batches to sell exclusively at the manufacturing site. He emphasizes that “there is a craze for whiskies; people are asking for novelty, even internationally”.

Among distillers, whiskey continues to seduce. Some players immediately place all their chips there. The initial investment — which involves equipment for “bean-to-bottle” production and therefore the square footage needed for fermentation and aging — however, prompts most to rely on d ‘cash cows’, such as gin.

“We want to make sure that we have done our classes and have achieved profitability before embarking on the whiskey project,” argues Daniel Corriveau, co-owner of Spiritueux Alpha Tango, a microdistillery open in Val-d’Or at the end of 2020.

The rapid success of Alpha Tango’s award-winning gins — one made with cattail and the other infused with raspberries — has allowed this father-son company to flirt with profitability. And therefore to continue to sniff the scent of the “embryonic whiskey project”.

“The gin justified the turnover for the whiskey,” confirms Michael Briand, co-owner of the O’Dwyer distillery, for whom the whiskey has been part of the plans “since the start” of the project, in 2017.

Except that the “angels’ share”, or the quantity of alcohol that evaporates during aging, is still too high in the dry climate of Gaspé to even think of marketing this product on a large scale. Michael Briand says thus losing 20 liters per barrel, the equivalent of a salary, he calculates.

“The acceptable loss for the angels’ share is 3%. Yes, we produce whiskey, but before putting [de grandes quantités] in the barrels, we have to find a solution to this problem. Otherwise, it’s throwing money out the window, ”he argues.

Another pitfall on the whiskey road: the mark-up. Even if they sell their products directly at home, Quebec distillers must pay a “local sales mark-up” to the government. A payment that eats into the already thin margins of alcohol producers, believes the Union québécoise des microdistilleries du Québec (UQMD).

Geneviève Laforest, development officer at UQMD — which represents 58 distillers in the province — believes that changing the regulatory framework could allow Quebec to become a “leader in distillation” in the world.

“I really think that if we are innovative and if the Minister of Economy and Innovation (Pierre Fitzgibbon) endorses this industry, we could develop – as much in whiskey as in liqueurs, vodka, gin and acerum — an absolutely incredible local pride that can be compared to any product in the world,” she concludes.

A surge of Quebec whiskey is about to flood the market