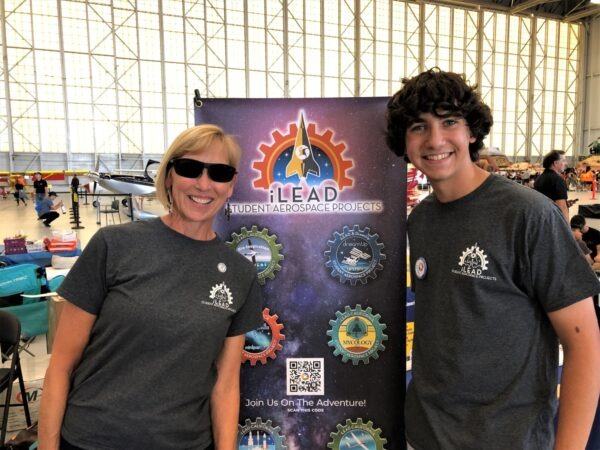 Grace Stumpf, 14, has always had a passion for the sky. Some of his favorite childhood memories were making paper airplanes with his dad and seeing which models flew the best.

These activities allowed him to discover the four forces of flight (lift, thrust, resistance and weight) and to understand how the wings and the wind work together. Also, when she learned that her science experiment proposal had been selected for the iLEAD CA DreamUp to Space Design Challenge competition and that she was going to witness her flight into space on a SpaceX mission to the international space station (ISS), we can say that she was over the moon.

“I was so happy I couldn’t believe it. I had before me this huge and incredible opportunity and this blessing. I was really a bit intimidated at the beginning”, said Grace. She received the message via email during her math class and had to explain to her teacher why she was jumping for joy. “I am so grateful for this opportunity, it has completely changed my life! »

In the DreamUp to Space Design Challenge, students learn about the ISS, microgravity, and space exploration, then use their skills to design, develop, and deliver experiences. Over 100 students were involved in the initial proposal phase.

iLEAD Principal Kathleen Fredette and student Carter Sand enjoy a STEAM event at an air show at Edwards Air Force Base, where more than 1,200 students participated in hands-on learning with experts from aerospace. Carter Sand and Grace Stumpf have been accepted for their classroom experiment to be sent to the International Space Station. (Linda KC Reynolds)

Grace Stumpf and her partner, Carter Sand, proposed an experiment to see how microgravity would affect the germination of the Yucca glauca plant, which supports the types of studies NASA conducts on resource exploration for extended space travel and colonization.

During their research, they discovered that this plant is native to Central America and its seeds can withstand dry conditions and temperatures of up to 121 degrees Celsius. Soap can be produced by grinding its roots with a small amount of water. This plant is edible and contains vitamins C and B, calcium and iron, and is useful for inflammations, arthritis and migraines. Its leaves can be braided to make baskets, so the whole plant is usable.

The space experiment will be replicated at the same time on earth to provide comparison data for evaluation. “We have to write instructions for the astronauts, which is very interesting”said Grace. “Before, I was so scared to speak in public, it was terrible, but now I think it’s fun. »

Two years ago, while having lunch at Fullerton Airport, near her home in Garden Grove, her father, Chris Stumpf, gave her a birthday card and a gift certificate for a flying lesson .

After the lesson, the instructor encouraged Grace’s father to support his daughter’s newly invigorated flight goals and said she already knew more than most of his adult students. Unfortunately lessons had to be canceled due to COVID-19, but this gave Grace time to study the basics and the opportunity to experience high flying. She was determined.

“I think a part of me has always felt the need to leave the ground behind”she explained.

Her father says he always did his best to teach Grace and her 11-year-old sister, Emma Stumpf, how to learn how to learn.

“If they learn to grow, adapt and be flexible, they will always have a job and never be stuck in one position. Children need to be exposed to things they don’t even think they care about. You never know what may spark interest”he said.

Grace embraced her father’s encouragement to have a possibility-oriented mindset. Her father has always been her best mentor.

Encouraged by Kathleen Fredette, Director of STEAM Initiatives at iLEAD Schools, Grace submitted an essay for a high-flying scholarship awarded by the Laze Memorial Soaring Foundation in Bakersfield, California, and won.

“Ms. Fredette is so inspiring, I love her energy and enthusiasm. She started out as my mentor and now I consider her a friend.” Grace said. “She has done so much for me and my family. She is truly an amazing person. »

It’s always a little scary for Nalani Stumpf, Grace’s mother, to see her fly over the Tehachapi Mountains.

“Grace was born prematurely, weighing less than 1 kg, and we have always protected her”, explains Nalani. The doctors had told her and her husband that they had to abort the fetus. They told them that if the baby survived, he would have a miserably short life, marked by blindness and very serious complications.

“It was the grace of God and the power of prayer that brought about the miracle of an intelligent and healthy child”said the mother with emotion.

The family drives from Orange County to Skylark North Glider Flight School in Tehachapi, a 300-mile trip for high-flying lessons. Grace’s sister doesn’t worry about the journey and takes the opportunity to read and draw animals. She hopes to become a veterinarian and knows that her family will give her the same support.

“One of the reasons we chose Grace’s essay is that she said she wanted to inspire other young girls to fly”said Jane Barrett, pilot and owner of Skylark North Airport. “Most people say they want to be a test pilot or an airline pilot, but Grace wanted to give back to the top-flight community, so that helped seal the deal. »

The courage to try new things

Grace doesn’t want to be considered rare because she’s a female pilot. In 2022, according to the Pilot Institutefemale pilots will represent only 9.2% of all FAA-certified pilots.

“I want to start changing the dynamic. My goal is to become a flight instructor and inspire as many young women as possible to have high goals”said Grace.

She feels she has succeeded because she has great mentors, the full support of her family, and she is no longer afraid to try new things. She met two astronauts and several test pilots at flight school. His most notable encounter was with Albion Bowers, who was the chief scientist at NASA’s Armstrong Flight Research Center. He was a constant source of encouragement to her. Pilots from Virgin, Lockheed and Northrop also cheer Grace on when they take glider lessons at the airport.

“I still have a long way to go, but when I look back and see how far I have come over the past few years, my 12 year old self would be very proud of who I am today”pointed out Grace.

How can you help us keep you informed?

The Epoch Times is a free and independent media, receiving no public support and not belonging to any political party or financial group. Since our inception, we have faced repeated attacks to silence our information. This is why we count on your support to defend our independent journalism and to continue, thanks to you, to make known the truth.